How Amy had managed to survive remains a mind-boggling mystery. She was literally skin and bone when she arrived at the Sandton SPCA – and so weak that she could barely lift her head. We knew that saving this dog demanded immediate medical attention – and our clinic team stepped in.

A drip ensured that fluids could filter into Amy’s dehydrated body, while antibiotics addressed the infection. Amy was also infested with fleas – her skin was raw and inflamed from futile attempts to stop the itch.

Initially, Amy couldn’t keep her food down. Numerous attempts to feed her followed the same pattern. It was only after receiving anti-nausea medication that she finally managed to eat what was possibly her first decent meal in months.

It took weeks of small meals, fed several times a day, for Amy to start gaining weight. Strict monitoring of her meals and health paid off for our clinic team – they’d grown fond of the little girl that was growing livelier, healthier and more confident every day.

What a joyous day it was when we could be part of Amy’s happy ending: the day she found her forever family. After suffering starvation and neglect on every level, Amy’s healthy weight, wagging tail and strong spirit were the most fitting reward for her resilience and will to live. 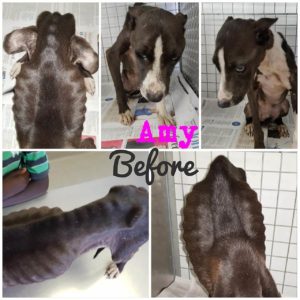 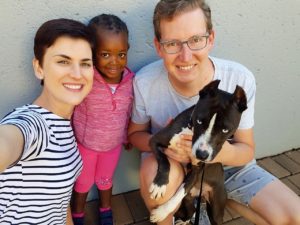